Echo represents the design of a responsive object. In an extension of our GIS research, we have identified locations in our site of exceptional community engagement. At these points, we propose to install a device that responds to local stimuli and in doing so modifies the levels of behavior around it. Equipped with a suite of sensors that can detect movement, sound and ambient light levels, our device will sense a change in the local environment and respond in the same language as that stimulus. Detected movement will cause our object to move while sound will cause our object to emit sounds in response.

Echo represents the heart beat of the community. As the local activity increases, the devices response becomes more excited and intense. The movement, sound and light levels are amplified and increase in frequency. The increased activity around the device becomes a higher threshold for the Arduino to compete with for attention as well as a more exciting environment for the device to react to.

By mimicking these stimuli we are creating an object that participates in the community environment. Echo seeks attention, and by attracting attention, it lowers the threshold of the ambient activity that it is competing against. In this way Echo transcends its namesake and becomes more then just a meter of activity; it becomes a character in a physical conversation within the urban fabric. 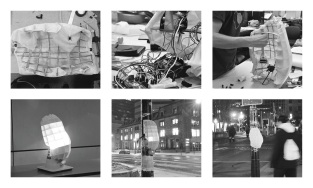